With the clock running out on his time as host of The Daily Show, Jon Stewart dropped by for a surprise appearance on The Nightly Show last night.

He was ostensibly there as as Larry Wilmore’s “Senior ‘Don’t Give a Shit Anymore’ Correspondent” so he could share some insight on what President Barack Obama must be feeling as he approaches he final year in office. But really, it was Stewart’s opportunity to address yesterday’s bombshell Politico report about his “secret” meetings with the president in the White House over the last several years.

Asked by Wilmore if the reports that Obama called Stewart to the White House for “secret” meetings were really true, he replied, “Well, I mean, I don’t know if they were secret” and pointed out that his name did appear in the official visitors log. He even shared a photo from their time spent together: 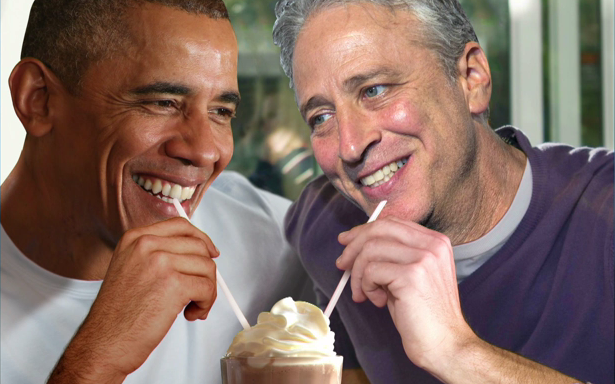 At first Stewart joked that Obama just wanted to “hang out, eat nachos and watch King Ralph.” But, then turning both more serious and a bit defensive, he said that Obama probably was trying to “influence” his material because “I have a television show and we sometimes say some pretty shitty things about his policies.”

As for the question of whether Obama is really in “I don’t care mode,” Stewart said, “No, I think he’s in ‘I’m gonna build me a library with my name on it mode.'”