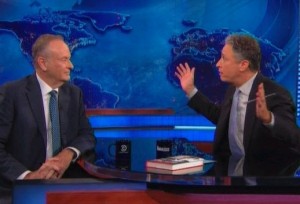 Last night two men faced off in what many would assume was the biggest debate of the week, but let’s face it, The Rumble In The Air-Conditioned Auditorium between Jon Stewart and Bill O’Reilly is guaranteed to be far more entertaining. Stewart appeared on The Factor a few weeks ago to preview and promote their showdown, and tonight O’Reilly returned the favor, sitting down with Stewart for a discussion on their big debate. Oh, and that other debate.

Stewart first asked O’Reilly if the folks at Fox News enjoyed what they saw at the Obama-Romney debate. O’Reilly mockingly asked Stewart, “Are we all the same?” Thy bantered for a minute or two over O’Reilly’s book Killing Kennedy, which Stewart said sounded like a confession to him. O’Reilly wryly said his next book would be “Killing Colbert.” Stewart told O’Reilly in response, “you are so going down Saturday night.”

O’Reilly told Stewart he heard Stephen Colbert was his debate coach, referring to this segment from last night’s Daily Show. O’Reilly said he’s not too worried about Stewart if he’s being prepared by “Colbert and a chicken.”

Stewart predicted that at some point during their rumble, O’Reilly will just drop all pretense and go all “Hulk” on him. However, he quickly changed topics to ask O’Reilly what he thought of President Obama‘s debate performance last night. O’Reilly found it odd that Obama never brought up Mitt Romney‘s controversial “47 percent” comments. O’Reilly suspected that Obama was so far ahead, he decided to make the race a little tighter “just to be exciting.”

Watch the interview below, courtesy of Comedy Central: