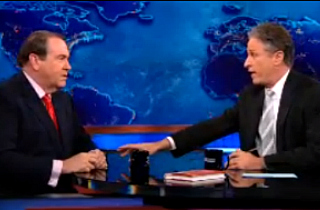 Former Arkansas Gov. Mike Huckabee and Jon Stewart went head-to-head last night on The Daily Show, in an interview that covered everything from the Republicans’ “pathetic job” at expanding their demographic base, Fox News, global warming, gay marriage, and the Bible.

Stewart began the interview by asking Huckabee about his election night comments that the GOP has done a terrible job at reaching out to minorities. “How do you reach out to people of color without necessarily addressing their concerns?” Stewart quipped.

Huckabee responded that Republicans have done a “pathetic” job explaining to minorities how conservatism “empowers” people to climb up the ladder and improve their lives. The two then took indirect stabs at conservatives like Sean Hannity, who only after the electoral defeat, “evolved” to seeing immigration from a more liberal perspective.

Stewart then took shots at Huckabee’s home network of Fox News for how they “utilize minorities,” showing the audience a compilation of Fox’s incessant election day coverage of the New Black Panther Party.

“You cannot simultaneously use a group of people as a bogeyman,” Stewart said before breathlessly trying to explain the twisted logic of “scaring” voters about “this one black guy” while trying to get the other black guys to vote for you.

“I think it would be a stretch to say every conservative has this kind of anxiety,” Huckabee pushed back. Stewart then attempted and failed to get the Fox host to say that the network’s coverage of the Black Panthers in Philadelphia was meant to put fear in some people’s minds.

The two then got into an exchange over whether you can argue against gay marriage, abortion, and climate science while remaining “scientific.” Huckabee argued that being pro-life is rooted in science because of the “irrefutable” evidence that human life begins at conception.

Stewart then confronted the former governor with one of his recent political ads that took a firm stance on abortion and “protecting” traditional marriage. “Are you saying that if you vote for the Democrats, you’re going to Hell?” Stewart asked.

“No!” Huckabee replied before quoting a Bible passage to defend the ad’s content.

“Don’t you think it is the height of human arrogance to presume what Jesus would vote for, down the line?” Stewart asked the Fox host, eliciting applause from the studio audience. Before letting Huckabee respond, however, the comedian went off on how he feels as though this ad implies that he is going to Hell simply for believing gay families can be great families and that they should be treated as normal members of society.

“All this is is a message to Christian believers,” Huckabee responded. “Your vote can’t be separated from your faith.”