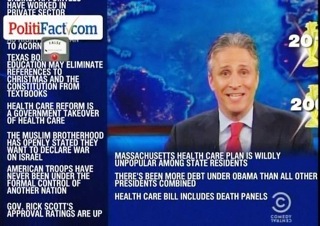 Jon Stewart‘s fiery debate with Chris Wallace on Fox News last Sunday is still generating fodder for the Daily Show, especially now that PolitiFact, the non-partisan correction organization, called Stewart’s statement that Fox News viewers were “consistently misinformed” false. But instead of merely apologizing humbly and moving on, Stewart spent most of the segment highlighting false claims made by Fox News over the years.

“It turns out that I was misinformed,” Stewart began, highlighting the comment that PolitiFact took objection to, “which is no surprise, since I watch a lot of Fox News.” He apologized for his statement, but did not neglect to toss in a reminder that he is, of course, just a comedian with no political influence whatsoever: lying, he joked, would undermine “the credibility that I work so hard to pretend to care about.”

And while the segment was meant to be about the fact that Stewart, a comedian with no political influence whatsoever (will you please leave him alone now?), was caught making a definitive statement that turned out the be a lie, most of the segment had nothing to do with his own words, but with Fox News. Stewart began putting a short list of falsehoods told on the network on the screen as he read them– all from PolitiFact– until they began to take up more and more of his screen. He also noted that Fox News won both the 2010 and 2009 “Lie of the Year” awards on the website, making them “the New England Patriots of lying– without the patriot part because I think we all know patriots never lie.” Some of the lies even got a special “pants on fire” rating, making them “the filet mignon of bullsh*t.”

In conclusion, Jon Stewart would like to clarify that Fox News, a 24-hour cable channel, has been caught in falsehoods more often than himself, a comedian with no political influence whatsoever (seriously, this isn’t so hard people) who gets half an hour four times a week to tell jokes about politics.