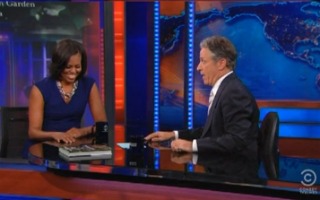 Host Jon Stewart kicked things off by asking if the First Lady wouldn’t have done better to have chosen colonization of Mars as her project over trying to get children and parents to make healthier choices. Later on, he made that point that, in some households, it’s quite a challenge to put a healthy, nutritious meal on the table after a long day of work when other, less healthy but faster options are so prevalent and readily available. “Is this, for you, more of a symbolic idea?” he asked.

RELATED: Michelle Obama On The View: ‘I’m Not Interested In Politics, Never Have Been’

“Well, the garden,” she said, “is a way to begin the conversation.” She noted that kids tend to be more excited about consuming fruits and veggies if they’re able to become part of and knowledgeable about their growth and cultivation.

She shared that kids working in the White House garden often partake in a “vegetable feast” after. Is there, Stewart wanted to know, a “cheese faucet” for this feast?

Switching things over to the “First Marriage,” Stewart was curious to know whether the First Lady ever used her 80 percent approval rating against her husband’s lower one. Ms. Obama laughed, but did note that the President often has to grapple with decision that, often enough, have no easy answer. “Really, when it comes down to it,” she told him, “when you’re making those judgment calls, all you have is your character, your value, your vision for this country. And I seem him being so consistent in, you know, disregarding the chatter and the noise and really moving forward towards a country where there’s more equity, more fairness, where our kids will grow up in schools that educate them, where they’ll have opportunity.”

She touted her husband’s health care initiative, his commitment to giving children and their parents access to insurance, and seeking “benefits and respect” for troops coming home from Iraq.

Stewart then asked whether it’s hard to raise kids around Vice President Joe Biden, or whether she’s ever thought “I can do that guy’s job.” Is he, he wondered, like the uncle who comes over bringing guns for the kids?

“No, he’s a great vice president,” she said, laughing. “He’s a great friend. My kids hang around him. And I’m good with it.

On the subject of her husband’s young adulthood, Ms. Obama said that it took losing his father and pressure from his mother for him to really look around and make the decision to transfer to Columbia and really buckle down. “That was before me,” she noted. Stewart noted that former President George W. Bush also went through something of a “wild” period in his youth. “I really related to that,” said Stewart, prompting laughter from the audience. “It’s the turnaround…”

The First Lady didn’t miss a beat: “I’m not taking any bait.”

Check it out, via Comedy Central: