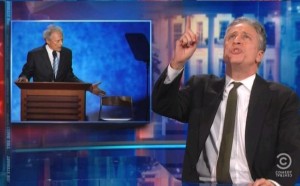 Jon Stewart opened The Daily Show‘s final night in Tampa by basking in the “awesome” and “hilarious” speech Clint Eastwood gave at the Republican National Convention, which consisted of the Oscar-winning actor yelling at a chair for ten minutes. But while Stewart was awe-struck over Eastwood’s speech, he was not so kind to Mitt Romney‘s acceptance speech, bashing it as being a whitewash of American history.

Stewart admitted he was “dispirited” by being in Tampa all week, but at the last second, Eastwood saved him with “a fist full of awesome.” He gleefully expressed his amazement that Eastwood “spent twelve minutes on the most important night of Mitt Romney’s life yelling at a chair,” describing the speech as the most amazing old-man moment he’s seen since “Dick Cheney non-fatally shot one in the face.”

Stewart told the Tampa crowd that in New York City, it’s not uncommon to see old men yelling at inanimate objects, but generally it does not happen on stage at political conventions.

Of course, the highlight of last night was supposed to be Romney’s acceptance speech, but Stewart noted that no matter what Romney had said, there was no way he could have outshined Eastwood. However, Stewart did slam Romney’s speech as being too idealistic about America’s recent history, and noticed it was part of a recurring trend at the convention that America could be great once again if it were not for President Obama and his policies.

But what set off Stewart the most was Romney’s comment last night that he wanted Obama to succeed from the very beginning. Stewart rebutted Romney by running clips of conservatives saying, less than six months after Obama was inaugurated, that he was already a failure. And most damning of all, Stewart ran a clip of Romney himself, eight days after Obama was inaugurated, saying that he “partially agree[s]” with Rush Limbaugh saying that he hopes Obama fails.

Stewart brought the segment home, going back to Eastwood’s speech and why he did a “huge favor” for the GOP. By criticizing an invisible Obama for doing things that the real Obama hasn’t even done, Stewart could reach only one logical conclusion: “there is a President Obama that only Republicans can see,” and this Invisible Obama is the one they have been running against all along.

Watch the epic segment below, courtesy of Comedy Central: