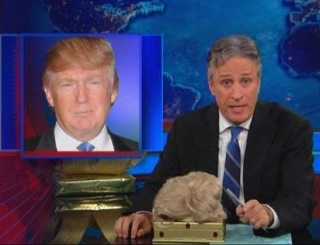 The general presidential election has not been what one would call a fertile comedy field for Jon Stewart. Mitt Romney is a mild-mannered and measured politician with a gaffe here and there but not what one would call a “comedy machine.” President Obama isn’t exactly easy to crack jokes about either, and before this Monday’s reentry of Donald Trump into the public discourse, Stewart was short on material. There was nothing left to do today for Stewart, then, than to thank the Comedy Gods and beg Trump to become a candidate in the race.

“28 years, $2 million, and three unsolved murders later,” Stewart joked, Republicans are finally officially with Mitt Romney. Stewart tried to mine Romney’s microphone joke for humor, but ended up just telling the audience to kill him. “Good thing I get two weeks off every other week!” he joked. And suddenly, from the heavens, descended a gift from the Comedy Gods: a “Trumpogram”: a box with weird hair on it and a bouquet of brand new Trump material for Stewart to use. “Thank you, Gilda Ratner, George Carlin, and Richard Pryor!” Stewart shouted, breaking down the three clips of Trump’s interviews, where he refuses to “give names” of people who are birthers along with him (“You look at my possessions, the only name I know is Trump” Stewart joked) and somehow started selling a mattress mid-CNBC interview– a mattress that isn’t even Trump brand. “Just because you’re sleeping on it doesn’t mean it is a Trump mattress,” Stewart noted, before arguing that it was cruel to be told to ignore Trump. “We have to cover Romney and Obama knowing this beautiful man is out there?” Stewart asked, describing him as a “rare bird” and his ego “like a goose liver that has been force-fed praise through its ears.”

“Donald, you have to get back into the race for president,” Stewart pleaded through the camera, “and not just because it would help me.”