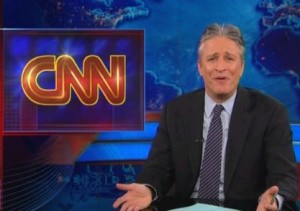 Jon Stewart targeted CNN on his show Tuesday night, mocking their segments within segments (“Political Pop,” “R&R,” and so on). “Why?” he asked, noting that often their branded news segments, er, don’t actually apply that well to the stories within them.

“I’m not against news organizations having fun,” Stewart said, but went on to note some segments that were mistakenly labeled — or just simply a bad idea. Example? A “Street Level” segment, which has to be easy, right? Except that it was about a paraplegic woman bungee jumping. Stewart noted, “Holy crap did they just throw a disabled lady off a bridge? And number two, that story did not take place at street level.”

Stewart then had a field day with the “Today’s Rock Star…” bit. One included a girl who escaped her abductor. “Take that, kids who didn’t get away from their abductors. I mean, come on, man!” Next up: Martin Luther King, Jr. “That is fucked up,” he said. “Do you have any idea what a demotion rock star is for Dr. King? Congratulations Dr. King, you’ve earned your seat next to Billy Idol.”

Next on the list was CNN’s repeated quips in reporting, including the abundant use of “your 15 minutes are up.” Stewart asked, “When did CNN get into the mean girl business?” He added, “What the hell happened to CNN? 20 years ago you were the only network bravely reporting from inside Iraq. […] Now you’re just a mean fifth-year senior shitting on people as they try to use the bathroom.”