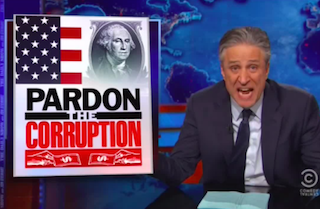 Jon Stewart opened The Daily Show Thursday night with an update on one of his favorite potential 2016 Republican presidential candidates who has somehow been flying under the radar of late: “Master negotiator” and New Jersey Governor Chris Christie.

Specifically, Stewart dug into New Jersey’s $9 billion lawsuit of Exxon in 2004 for a massive chemical spill in that state. After Christie stepped in to handle the negotiations, he got the company to cough up a whopping $225 million. “Christie said he was a great negotiator, he didn’t say which side he was working for,” the host remarked. Perhaps it had something to do with Exxon’s large donations to the Republican Governors Association?

“Yes, Chris Christie, your amazing negotiating skills will get New Jersey a lot less money than almost everybody associated with this case, including Exxon, thought it would get,” Stewart said.

Next, Stewart moved on to his home state’s other big corruption problem: Democratic Sen. Robert Menendez, who is facing charges from the Justice Department. “Our politics are so sick,” he said, after showing clips of people defending the senator, that what was once widely considered “corruption” is now viewed as a “fuzzy line” and “what are you going you do?”

The only reason anyone looked into the Menendez story in the first place is because he allegedly paid for Dominican prostitutes. “Oh, there’s prostitution in this story, but I don’t think they’re from the Dominican Republic,” he concluded.