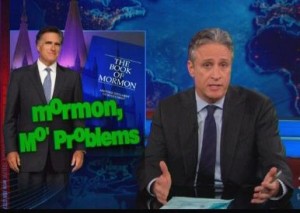 Jon Stewart addressed Mitt Romney‘s Mormonism on Wednesday, and those who seem to view him as not being part of Christianity. Going through various remarks and concerns, Stewart ridiculed the whole debate, ultimately quipping that Romney’s inevitably discriminatory potential policies having nothing to do with his faith.

Following clips of those commenting on Romney’s religion, Stewart remarked, “Simple math. I hate Barack Obama more than I love Jesus.” He then moved on to Montana Gov. Brian Schweitzer, who commented that Romney’s grandfather once belonged to a polygamy commune in Mexico — before apologizing for it. “Why are politicians so adept at the dickish apology?” Stewart asked.

But he digressed, bringing up what the Book of Mormon says about lying. Are Romney’s only choices lying to get to the White House but bringing eternal damnation upon himself versus telling the truth? Nope, Stewart said. He can do what every president does: “continue to profess your faith whilst also lying.”

Toward the end of the segment, Stewart addressed the assertion, which Lawrence O’Donnell phrased as: “So, did Mormon men Mitt Romney’s age actually believe or ever believe what their hero Brigham Young taught them about the african race that they would die on the spot if they had sex with a black woman?”

“You can’t cherry pick the worst aspects of the a religion and hold a person responsible for it,” Stewart said. “It’s not like Mitt Romney will pursue policies that are unfair to black people because he’s a Mormon. He’ll do that because he’s a Republican.”