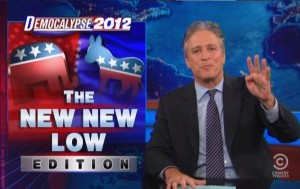 On Wednesday night, Jon Stewart took to scrutinizing the recent back-and-forth between the two presidential campaigns, narrowing in on Vice President Joe Biden‘s controversial “chains” remark and Mitt Romney‘s accusation that President Barack Obama is running a “divisive” campaign based on “hatred.”

Stewart agreed that Biden’s remark wasn’t a great move, but pointed to his past. Asking “a man in a wheelchair to stand up for what he believes in,” for example. Cue the Republican response — and a clip of Romney telling the Obama campaign to take their “division and anger and hate” back to Chicago.

“As a general rule,” Stewart observed, “I find it helps not to frame a plea for national unity by insulting a major city within that nation.” But it’s not just Chicago, he noted, rolling a montage of conservatives pointing to “liberal havens” like New York, Massachusetts, California, Martha’s Vineyard and Hollywood — plus another montage featuring “what Americans are not worthy of inclusion in this unified America.”

And then there are the places we can learn more about this divisive and angry rhetoric: Books. With titles like Liberal Facism and Unhinged: Exposing Liberals Gone Wild.

And then there’s Sarah Palin, who argued that no prominent Republican spews the kind of divisive rhetoric that the left has been using. Stewart begged to differ, proceeding to run a clip of comments by Palin herself — ranging from accusing Obama of palling around with terrorists and calling Nancy Pelosi a dingbat, to, “They’re like dead fish.”

There are only two explanations, Stewart concluded: “One, not even Sarah Palin believes she’s a prominent Republican anymore or, two, Sarah Palin can no longer hear herself speak. You can read about it in my new book The Luckiest Woman in America.”