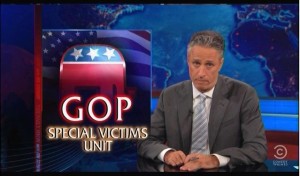 The labeling of Norwegian mass murderer Anders Breivik as a Christian has brought out the victim side of many conservatives in the news. Jon Stewart took notice of the maimed pundits on Fox News tonight, pouring through their complaints and siding with some of their grievances, before compiling and extensive montage of insults culled from the network’s most popular shows.

“The massacre in Norway is a tragic story about the persecution of Christians,” he teased after a clip of Laura Ingraham arguing that labeling Breivik a Christian was disrespectful to the religion. Those that highlight his “crusader mentality,” Stewart advised her, “are not doing it to get at you.” Instead, he argued, they are doing it because of “the shooter’s 1500-page, crucifix-drenched manifesto.”

He then compared the arguments to the perception of Ford Hood shooter Nidal Hassan, his target of choice this time being Bill O’Reilly. “Isn’t it enough for one man to have to determine who among us is pinhead or patriot,” he joked, “but to determine Christian from heathen? He’s but one very tall man, or a short man on another man’s shoulders wearing an oversized suit.” The line that got him the most mockery from Stewart, however, was his argument that Hasan was Muslim because of his “Soldier of Allah” business cards. “That guy printed up ‘Soldier of Allah’ business card; the other guy only printed up an Army of Christ manifesto… both psychos, for some reason, spent the day at Kinko’s.”

This led Stewart to a broader dismissal of conservatives playing the victim in an extensive montage of Fox News personalities both claiming victims overplayed the “victim” card and claiming that conservatives were constantly persecuted, the greatest highlight perhaps a comment from Gretchen Carlson that “Christians feel lonely at Christmastime.” “Gretchen,” Stewart advised, “if you ever feel alone at Christmastime, head over to a Chinese restaurant.”