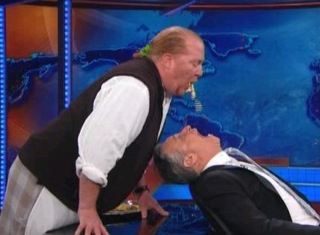 How Jon Stewart got chef Mario Batali to feed him an omelet “mother bird” style in order to make a statement about Stephen Colbert‘s SuperPAC, we may never know, but that it happened is a fact on film. The new president of Americans for a Better Tomorrow, Tomorrow took to the stage today wearing a tiara and spending money on insane and useless things, much like other SuperPACs have done for candidates Mitt Romney and Newt Gingrich, and was legally unable to tell Colbert anything about it.

Stewart took to his desk in a bejeweled tiara, only adding as explanation “I’ve come into a bit of money,” then showing the moment that he received control of the SuperPAC, and then added, “I don’t know what to do with the money– Stephen Colbert, by the law, cannot coordinate with me.” “I’m just out here like a cartoon hobo who just won the lottery,” he added, so he spent money on the tiara and things like air-writing numbers into the air that should look like they spell “BOOBS” in China.

“There’s no way Stephen Colbert wanted Jon Stewart to blow his money on all this crap,” he joked, adding that even if he did, he could only publicly say so. On that note, he went and bought himself the fanciest omelet ever, courtesy of Mario Batali. And he paid extra for the most disgusting way to digest it possible.