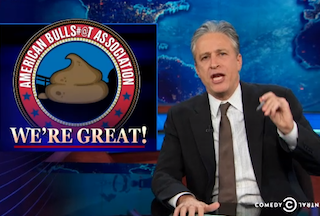 After he summed up the State of the Union and subsequent GOP responses last night, Jon Stewart moved on to the backlash President Barack Obama’s speech has received from Republicans who are accusing him of giving up on bipartisanship. For Stewart, those claims are “total bullshit.”

Stewart translated Obama’s promise to use executive orders to bypass Congress as, “With all due respect, fuck all y’all.” But the way that Republicans responded to Obama with “hurt feeling” is what he found most outrageous. “The only problem with their ‘we just want to work with him’ is that it’s total bullshit,” Stewart declared. “Premium, grade-A, grass fed, free range bullshit, collected and packaged by hand from the polished anuses of award-winning Texas longhorns that have been bred for peristaltic perfection so that each individual dookie meets the exacting standards of the American Bullshit Association.”

And we wasn’t done after that. Stewart proceeded to use tweets from a GOP congressman calling Obama a “socialist dictator” as just one example of how absurd it is that Republicans are claiming they want to work with the president. After showing a clip of Rep. Paul Ryan (R-WI) threatening a “big problem” with Obama, Stewart said, “No, you’re not going to have a big problem, because you already had a big fucking problem.”

By the end of the segment, Stewart turned to one Republican member of Congress who showed his true colors when he thought the “cameras weren’t on”: Rep. Michael Grimm (R-NY), who threatened to throw a NY1 reporter off a balcony following the State of the Union.

“You know what’s almost more upsetting than knowing that Republicans from day one planned to sabotage the administration in every way that they knew how? Or that the guy threatening to hurl a NY1 reporter off a balcony is not a thug in a Batman film, but someone we elected to Congress? Or that the public persona these folks display is so radically different from how they behave otherwise?” Stewart asked. “It’s that he went after a NY1 reporter.”