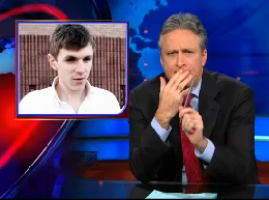 For the past few days, Countdown’s Keith Olbermann has been gleefully tying conservative politicians and media figures to alleged federal criminal James O’Keefe by dint of their praise for the costumed filmmaker’s “journalism.” But Fox News, Andrew Breitbart, and company weren’t O’Keefe’s only boosters. On last night’s Daily Show, Jon Stewart cast the net wide enough to include himself, but missed a few others.


He really takes it easy on himself here, as his original O’Keefe segment was full of effusive praose for the journalism on display, finger-wagging at the rest of the media for not doing the same, and nary a syllable about the questionable nature of O’Keefe’s process.

Of course, Jon Stewart isn’t the only non-conservative at fault here. The rest of the media caught up and covered the story, and even when they questioned O’Keefe’s methods, never connected the dots between his process and his product. Even those who bothered to criticize O’Keefe’s methods made little effort to point out that the end product might be completely useless as a result. ACORN was still the story.

Now that O’Keefe has been exposed, doesn’t Bertha Lewis’ defense, that the tapes were heavily edited and not representative of ACORN, deserve a second look? If you accept that James O’Keefe may be criminally untrustworthy, then ACORN deserves to have its presumption of innocence restored.

Rules and ethics in journalism aren’t there to level the playing field, or to keep out the moxie-laden. They are the nucleus around which facts revolve. Without that, you have nothing.