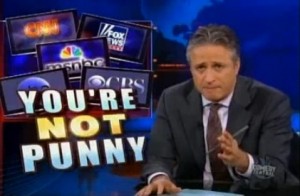 After a week-long break for Thanksgiving, The Daily Show returned to mid-season form with the following segment in which host Jon Stewart rips the media for the innocuous but annoying habit of making excessive puns while delivering the news. Like virtually every other segment that critiques the media, this follows the same form: a brief set-up, followed by montage of newscasts then a comedic admonishment from Stewart. Predictable? Sure, but still funny.

Stewart admits that he also is guilty of putting puns on his show, but clarifies “We hate ourselves when we do them even more than we usually hate ourselves” adding “but when you do them, it’s different.” Is it? Watch the segment from Comedy Central below (the text of Stewart’s admonishment comes after the clip via TVEyes):

Here is the thing about your word play: no one likes it. No one! The point of reporting the news is not to make one recliner bound old man smile for half a second. For God sakes you are the news, not Ziggy!

Do we put puns on this show? Yes, yes. Always up in the corner, never out loud. We hate ourselves when we do them even more than we usually hate ourselves. But when you do them, it’s different. They are not just painful and unpleasant they take us out of the newscast.

It’s like in the movies when people start phone numbers with 555. it’s completely unnecessary, “oh would you like my number? Sure it’s 555 I’m just in a movie.” You don’t need to do it.

Imagine if you had a friend who did this all the time. Last time I stayed in with the cat. It was a prrrrfect evening. That’s you. You are that friend. Everybody hates that guy.

But you don’t have to be. By the power vested in me by nobody I release you, news. You don’t have to do stupid puns anymore. You want it to be official? Look at this I got a quill and old fashioned paper. By this act, I Jon Stewart, grant newscasters prrrmission to stop with the world play because where there’s a quill there’s a way. I’ve got the write stuff for the decoration of, indepundence.