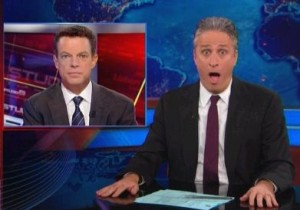 On Thursday night, Jon Stewart again took a look at President Barack Obama‘s gay marriage endorsement — and just how far the national conversation on the issue has come. Particularly over at Fox News.

Stewart took a look at how Vice President Joe Biden basically forced Obama’s hand, expediting the president’s announcement. “A big mouth friend of yours, you know, said something. Now everybody knows something about you that you were hoping to tell them in your own way,” Stewart said. “Congratulations, Mr. President. You really have walked a mile in gay America’s shoes.”

And then he moved on to Fox News, where one Shepard Smith remarked that the president was now “in the 21st century” and that Republicans were on the “wrong side of history” on the issue. Pardon? Say what, Fox News host? Thusly, Stewart ran through some past remarks about same-sex marriage on Fox News. There’s Newt Gingrich noting the “gay and secular fascism in this country,” for example. There’s also Bill O’Reilly, who so eloquently described the issue’s “slippery slope”: “If you legalize gay marriage and gay sex and all of that, then anybody who wants to marry five people can do it, commune people can do it, you can marry a turtle.” (In which case, Sen. Mitch McConnell’s vote would be a sure thing, as Stewart noted.)

Fast-forward to present-day Fox, and cue the montage of remarks about Obama’s political calculation behind his gay marriage endorsement. Stewart remarked:

This is the true measure of how far we’ve come as a nation. In like five years, the prime talking point from Republicans about people who support gay marriage has gone from, ‘It will destroy society via turtle fucking,’ to, ‘Oh, of course you’re for it, you’ll say anything popular to get re-elected.’ And that is progress.

Toward the end of the segment, Stewart turned to Hollywood Correspondent Jason Jones, to investigate whether the gay marriage issue really is all that important about the Hollywood lot. Jones, reporting from George Clooney’s Obama fundraiser, confirmed every stereotype.

Jones summed up the timing of the announcement and the fundraiser rather concisely: “It’s like going to Israel after killing Hitler.”