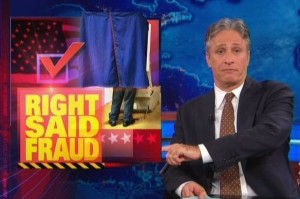 On his show Tuesday night, Jon Stewart took a skeptical look at voter ID laws and voter fraud: Who are they actually targeting?

After first showing a Pennsylvania lawmaker’s comment about how voter ID will help Mitt Romney win the state come November, Stewart noted that the issue of voter fraud “by all accounts, is nonexistent but nevertheless a major concern for all Americans.”

For more on the topic, Stewart turned to Senior Black Correspondent Larry Wilmore. “On behalf of black people I need to apologize to America,” he said. “Obviously these laws were meant to suppress the black vote, which has gone 95 percent for Obama — but it wound up hurting innocents like Jim Cramer’s dad.”

“In the world of voter suppression black folks are the delicious tuna,” he added. While veterans and the elderly are “just the innocent dolphins who get pulled up in the net.”

The whole approach is wrong, Wilmore told us. You can’t hope a policy will disproportionately affect blacks — you have to make sure it does. “Racism works best in person,” he advised.

He then provided an antidote: “I urge black people to vote early and often. And then late.” Via a “concerted get-out-the-fraud effort,” to make up for lost time.