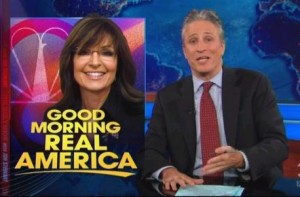 Following Sarah Palin‘s gig co-hosting Today, Jon Stewart zeroed in on her appearance — and particularly on Palin saying she was “infiltrating” the lamestream media. She’s acting like she’s “uncommonly ballsy,” he said, when really ” it’s just another place for you to tout your brand of homespun nonsense unchallenged!”

Palin was “quite good and likable,” Stewart said. But that wasn’t the issue. “It was mostly with how Governor Palin seemed to view it,” he said. Stewart then highlighted a tweet in which Palin said she was going to “go rogue” and “infiltrate some turf.”

Stewart summed it up: “I think it means you’re cynically exploiting a manufactured notion of yourself as a crusader against a monolithic exclusionary activist liberal media, whilst actually enjoying a mutually beneficial, symbiotic relationship with them — only to the detriment to the rest of the country.”

“It’s the Today Show!” he continued. “Do you really believe co-hosting the Today Show is is entering the lion’s den, armed only with some Jesus fish earrings and an Iwo Jima sized flag pin?” He then launched into detailing how ridiculous Palin’s perspective is:

Governor Palin acts like she needed to protect herself from the lamestream liberals like garlic to a vampire when the truth is, you’re at the Today Show! You’re there to talk about party planning with Tori Spelling! To pretend that you remember who Wilson Phillips is, or to hang out for some light-hearted couch banter with Matt and Ann and Al — instead of acting like you’re sitting with which Che and Lenin and Saul Alinsky. You’re pretending this whole appearance is some uncommonly ballsy way of sticking it to the lamestream media. It’s just another place for you to tout your brand of homespun nonsense unchallenged!

Hitting Palin’s “failed socialist policies” remark, and suggestion that Oprah Winfrey should get some conservatives on her network, Stewart said, “That’s it, in a nutshell. The simplicity and prejudice of your worldview that the patriotism and goodness of something is in direct proportion only to the amount of conservatism in said thing. And that equation so rules your life that you offered that advice spontaneously to the question of ‘how do you think Oprah’s doing?'”

But he digressed: “Now you may be wondering how a high profile conservative like Sarah Palin could infiltrate America’s favorite morning show in broad daylight. We wondered the same thing so we sent John Oliver over there this morning to investigate.”

Watch the segment, via Comedy Central: