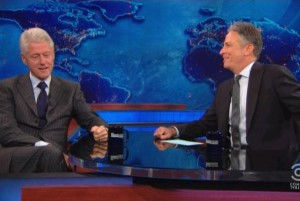 Former president Bill Clinton sat down for an interview on The Daily Show, and right off the bat Jon Stewart brought up Clinton’s long, well-received speech from the Democratic National Convention a few weeks ago. Stewart asked Clinton if, in the moment, he would tell that he was “crushing it.”

Clinton explained that he was trying to “simplify the argument without being simplistic” or talk down to people. Stewart told Clinton it was a “bold choice” to mix the facts in his speech with actual numbers attached to them. Clinton said that one of his favorite responses to his speech was a conservative Republican who didn’t vote for him in 1992 or 1996, but admitted that in his speech, Clinton “treated me like a grown-up.”

The former president said that he has a lot of time on his hands these days, and he’s noticed a lot of “disparate facts” being spread about the internet, so he decided to boil down the most important and accurate points “without calling anybody names,” though he admitted to getting a jab or two in about the welfare attacks on Obama.

Stewart repeated that he was impressed with the “simplicity” of Clinton’s speech and contrasted his specifics with Mitt Romney‘s vagueness. Clinton noted that Romney made a lot of “commitments” in the Republican primary while he “was playing whack-a-mole” with his more conservative rivals, but now he’s running in the general election. Clinton said if Romney is going to be a viable alternative to Obama, he actually has to be specific about his economic proposals.

Clinton acknowledged that the danger of ideology is that “it gives you the answer before you look at any evidence.”