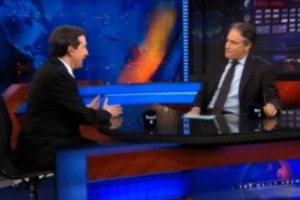 When Fox News Sunday host Chris Wallace visited the set of The Daily Show last night, Jon Stewart exhibited an entertaining mix of mutual respect and tough love. Phrases like “You guys are seriously the best” and “you guys know how to produce television” were mixed with “Congratulations on retaking control of the House of Representatives” and some sharp criticism of FNC’s uniquely powerful brand of “opiniotainment.” The following interview is wildly entertaining, in large part because Wallace and Stewart clearly like and respect each other.

The banter was both lighthearted and pointed, like in the following back and forth:

Stewart: Congratulations to you and your team at Fox. Great job. You did it. You worked hard and you pulled it off. Terrific.

Wallace: The fact that we have the highest rating and more ratings than CNN and MSNBC combined?

Stewart: No, no, no—retaking control of the House of Representatives. You did it. It was not an easy job.

Stewart followed by asking if it’s weird for Wallace, as the “news guy,” to interview someone like Sarah Palin—who is not only a national political figure and possible candidate for the 2012 presidential election, but also a Fox News cohort. Wallace replied that it’s not very hard, adding, “The point is they are contributors, and I think it’s to our credit that we’ve gotten some of the most compelling voices on the Republican side as contributors.”

Stewart also took a shot at Fox News’ cable competitor MSNBC, in what was one of the interview’s harshest critiques:

“It’s interesting that in some ways, MSNBC—by trying to maybe become a version of that… You cannot defeat Fox by becoming what they say you are. If Fox’s game is, “the media’s biased against Republicans,” all you are doing is giving them that field. The only way you can defeat them is through, like, an earned credibility, not an earned partnership. They are making a mistake by becoming equivalent to Fox rather than becoming a brand new journalistic organization.”

Buried within the fascinating interview, there were a lot of bon mots, none of which were very friendly towards the management team at MSNBC. (That’s not so unusual, since Stewart and Wallace both compete with MSNBC.) And while Stewart was critical of Fox News, it’s clear that he respects their influence and power as demonstrated not only by their ratings, but also by the election’s results. Congrats?

Watch the video from Comedy Central below: