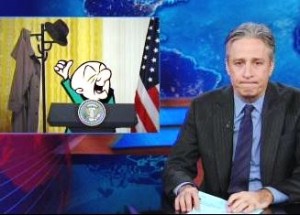 For the third night in a row, Jon Stewart was unrelenting in going after the Obama administration for the multiple scandals it’s been caught up in. Stewart admitted that after piling on Fox News for so long for overreacting to every little thing Obama does, they finally have something to be justifiably angry about, and could not begrudge them their moment of outrage. Stewart even agreed that President Obama could have acted like Richard Nixon, but if he wasn’t directly involved, it’s still bad because that makes him Mr. Magoo.

Stewart recapped the “shitstorm that is rocking the Obama administration” with Jay Carney getting pummeled by the press “for our entertainment purposes.” Stewart admitted that this is a good week for conservatives, and comically forced himself to come out with the words that conservatives are right to be outraged.

Stewart said the content of criticisms also seem fair, though he did poke fun at Dana Perino for saying the White House has poor “scandal-dar” in an extended joke that just ended with a random snipe at Donald Trump.

Stewart agreed that if Obama was directly involved in the IRS targeting or the AP phone records seizure, then he could be fairly described as Nixonian, but if he was not, then he’s merely clueless of his own administration and would therefore classify more as a Mr. Magoo-type.

But amidst the allowance of conservatives to have this moment, Stewart had to also smack down both Donald Rumsfeld and Dick Cheney for finding it shocking that someone in government would go before the public and tell lies. Stewart sniped, “After the lies you told, you don’t get to doubt anyone’s credibility.”