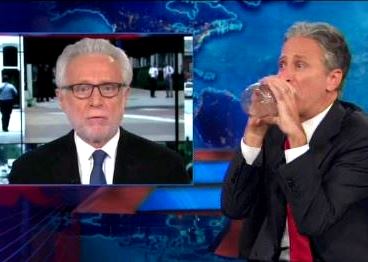 Jon Stewart opened Tuesday night’s Daily Show with a powerful indictment of how cable news covered the Washington Navy Yard shooting, aimed squarely at the “breathless wrongness” of CNN. Stewart spent not one, but two whole segments mercilessly tearing CNN apart for how awfully it covered the shooting, especially all the unnecessary speculation.

Stewart yelled at one CNN reporter, “You’re just standing in front of a camera naming shit you see!” and likened it to “walking down the street with a five-year-old.” He ran the gamut from one anchor demanding to know the size of a building to another asking about the clothes someone who may have been the suspect possibly wore. And even tempering the speculation wasn’t enough, with Stewart advising that if what you’re about might be incredibly wrong, “don’t say them out loud!”

Stewart concluded that the “vomit onto the screen” CNN was projecting “is a feature, not a bug,” and figured out exactly what game they’re trying to play after playing a clip of Jeff Zucker boasting about CNN’s Boston coverage ratings.

“The lesson they take from this is, it doesn’t matter how much they betray our trust, we’ll keep coming back. We’re in an abusive relationship with CNN! And it’s time we kicked those bastards to the curb, because we have to remember, this network was created by Ted Turner, not Ike Turner.”

In the second segment, Stewart’s team of correspondents (John Oliver, Jason Jones, Samantha Bee, and Aasif Mandvi) appeared in a pack outside CNN’s headquarters to give them a taste of their own medicine.

Watch part one below, via Comedy Central: