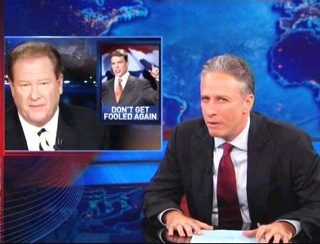 For a good 24 hours there this week, Republican presidential candidate governor Rick Perry had to fend off charges of racism for calling the national debt a “big black cloud.” Huh? On tonight’s Daily Show, Jon Stewart got down to the bottom of charges mostly stemming from MSNBC that Perry had used the term for President Obama, and together with John Oliver and Wyatt Cenac found the culprit through a montage of clearly innocuous statements featuring names of colors from the network: “The real bigot here is Ed Schultz.”

After a roundup of the media’s incredibly short attention span that had them running from Rep. Michele Bachmann to Perry to Rep. Paul Ryan— a game he surmised to a child demanding his mother buy him all the latest toys (“and before I get you anything, where is your Ron Paul?!”), Stewart played the abridged clip of Perry referring to the cloud over America, followed by accusations that he was talking about the President. “What? Pretty sure Rick Perry was saying the black cloud was the debt,” Stewart noted– indeed, “debt” was only two words after “cloud” in Perry’s comments. “That’s the thing about clouds,” Stewart joked, “some people see a racist dog whistle, while some people see George Washington wrestling a leprechaun.”

To help him figure out whether the comment was racist or not, Stewart employed the help of correspondent Cenac, but got John Oliver anyway, who seemed to think anything except actual racism was offensive (he also really liked The Help). After some banter on whether Perry was racist, Cenac turned the tables on the origin of this meme (who has since apologized), noting that Schultz had used all sorts of “slurs,” like “red herring” (what’s he trying to say about Native American people?”) and “yellow monster” (he was talking about a lobster, but Cenac and Oliver assumed it was a veiled reference to China, despite the obvious lack of evidence).

Between standing up for Rep. Ron Paul against a stream of media apathy, Stewart seems to be making a lot more friends in the Republican Party that he has for himself in a while.