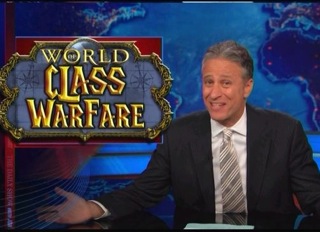 After several days of courting conservatives with a surprisingly strong defense of both Rick Perry and Ron Paul, Jon Stewart went back to his bread and butter today, taking some time to give his fans the sort of red meat that makes the show so popular– mocking various Fox News personalities for claiming that closing tax loopholes could be tantamount to “class warfare.”

Stewart used “bizarrely uneccentric billionaire” Warren Buffett and his recent column asking the federal government to raise taxes on people in his economic class as a starting point. While Stewart thought of it as “a thoughtful treatise” on the way taxes are divided in this country, it appears that many conservatives decided on television that it prompted “class warfare,” which Stewart found ridiculous. Featured along the way are all of the usual Fox News suspects: Eric Bolling, Neil Cavuto, Andrea Tantaros, and a bunch of other personalities, who Stewart also argued were far more pleased at raising taxes when it was proposed for the poor.

Stewart then mocked the various arguments used by some in the media for taxing the lowest 51% of the population, despite only having about 2% of the nation’s wealth and their taxing wouldn’t do as much to fix the debt than raising taxes on millionaires– take, for example, the number of people under the poverty line who own refrigerators, dishwashers, or both. Not that Stewart blamed the 25% of poor people spending money on dishwashers– “after a 12-hour shift of washing dishes, the last thing you want to do is bring your work home with you,” he joked.

The problem wasn’t class warfare at all, Stewart concluded, but that “they’re engaging in the wrong side of the war,” defending the poor, who were, as another montage proved, anything from “moochers” to “animals.”