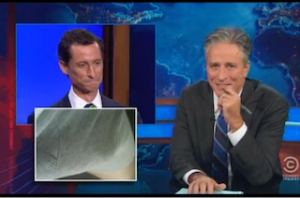 Jon Stewart has a long history with Anthony Weiner. Their decades-old friendship has always made it a bit awkward when Weiner does something so stupid that Stewart has no choice but to brutally mock him on The Daily Show. With the New York Mayoral Primary just days away, Stewart took the opportunity to produce one (presumably) final take down of Weiner, who may have finally hit rock bottom.

Stewart began by looking more broadly at the New York race, and the end of the Michael Bloomberg era. He showed some clips of embarrassing questions from the final Democratic debate this week, but struggled to make jokes about the more competent candidates so quickly moved on to Weiner.

On Weiner’s answer to the question about how often he has a housekeeper at his house, Stewart said, “there’s that charm that borders on the edge of dickish-ness.” Showing Weiner’s infamous “selfie” pic, he framed Weiner’s campaign as one that was “designed as a humble bid for New York voters’ redemption and forgiveness, but now it is somewhat noticeably curved a bit to the right away from that premise.”

John Oliver may have had fun with Weiner this summer, but it was nothing compared to what came next as Stewart ran through some of the mayoral candidate’s greatest pandering hits with help from Jessica Williams, Aasif Mandvi and Al Madrigal. Finally, he landed on the confrontation with a Jewish voter than may just have been the final nail in campaign’s coffin.

When Stewart discovered that Weiner was actually arguing with the man because he had made a crude comment about his wife, Huma Abedin, the host had a revelation. “What if everything Anthony Weiner has done actually makes sense if you look at it a larger context?” he wondered. “What if there for each of these incidents, one piece of information that makes each incident okay?”

After testing out his theory, Stewart concluded, “Nah, he’s just a guy with self-control issues who never should have run for mayor.”