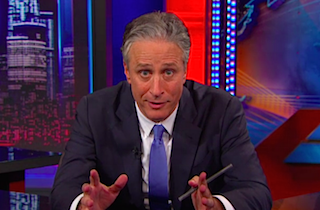 After the return of every correspondent ever, after the funny barbs from members of Congress, and after Stephen Colbert managed to bring Jon Stewart to tears, the outgoing host of The Daily Show was left alone behind his desk of 16 years to deliver one final, passionate “evisceration” of — no bleeps this time — “bullshit.”

Asking viewers to meet him at “Camera 3” one last time, Stewart summed up what he has learned over the past decade and a half by declaring, “Bullshit is everywhere.”

Stewart went on to define the “three basic flavors” of bullshit:

2) “Hiding the bad things under mountains of bullshit.” For instance, clicking “agree” on iTunes’ terms of service, “even if it grants Apple prima nocta with my spouse.”

3) “And finally, it’s the bullshit of infinite possibility. These bullshitters cover their unwillingness to act under the guise of unending inquiry. We can’t do anything, because we don’t yet know everything.”

The host finished with a message for anyone out there who is interested in taking up his anti-bullshit cause. “The good news is this,” he said. “Bullshitters have gotten pretty lazy and their work is easily detected. And looking for it is kind of a pleasant way to pass the time.”

“So I say to you tonight, friends, the best defense against bullshit is vigilance,” Stewart concluded, before co-opting that familiar post-9/11 slogan for a new era. “So if you smell something, say something.”

Despite his dire warnings about the pervasiveness of “bullshit” in our current climate, Stewart’s message carried some of the same surprisingly optimistic tone he put forth five years earlier at his Rally to Restore Sanity and/or Fear with Colbert.

Then, as now, Stewart urged his fans to rise above the “24-hour politico-pundit-perpetual-conflictinator” and instead embrace “sanity,” which is arguably the opposite of “bullshit.”