Jon Stewart: Demagogue Or The Most Rational Man On Television? 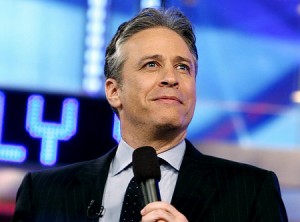 The Daily Show‘s Jon Stewart is being credited by many for igniting the media and public outcry that ultimately resulted in passage of the 9/11 First Responders Bill. However, not everyone is praising the comedic host, as John McCormack of The Weekly Standard suggests Stewart’s crusade for legislation and self-appointment as the “arbiter of what political beliefs are ‘insane'” have made Stewart more of a demagogue than a respected journalist. No matter what you call Stewart, his growing influence is proving hard for anyone to ignore.

The main critique of Stewart is that he didn’t have Republicans who objected to the bill on his show to explain their rationale. Whether this proves Stewart eschews rational argument in favor of just appealing to emotions is a bit of a stretch. Even more troublesome is the notion that if every side of an argument, no matter how ridiculous, is not presented with equal time then journalism has failed. And possibly the most unjustified, is criticizing Stewart for not being a fair news program, as if no other media outlet exists for Republicans to get out their message and when Stewart himself bills The Daily Show as merely a comedy show on the sidelines making fun of everyone.

While Stewart did not give the Republicans a chance to argue their view, even if he had, they hardly had anything worth hearing, as they were inexplicably “skeptical” of the First Responders Bill. Their skepticism of a hugely expensive bill is not what was irrational, but their response of wanting to wait to argue it more next year certainly was, since as Stewart commendably demonstrated, many of the First Responders need health coverage, and certainty, now. Rather than allowing themselves to be painted as heartless grinches, if Republicans had immediately offered up a competing, and much less expensive bill, they could have been viewed as benevolent and budget-conscious.

With Stewart, and others like Fox’s Shepard Smith, shaming Republicans into supporting a compromised bill, the criticism aimed at Stewart is ultimately misplaced. Really The Weekly Standard should be criticizing Republican leaders for failing to realize that with Stewart watching them, no longer can they get away with not providing a rational defense for their arguments, and ultimately such forced accountability is proof that Stewart, and his brand of journalism, is indeed working.