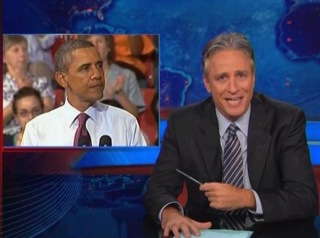 Jon Stewart was electrified by President Obama’s jobs speech last week to a joint session of Congress. Giving his review tonight of the President’s attempt to get Congress on board for the American Jobs Act, Stewart wondered why President Obama had kept the rhetorical fire inside until now, concluding that perhaps the solution to our financial woes was switching to a “campaign-based economy,” making speeches and campaign props the center of the economy.

Stewart admitted he was somewhat dismayed that the speech’s passion was not particularly echoed by the title “American Jobs Act”– “what ‘Employment Ideas TBD’ already taken?” he joked. For suggestions, he looked toward something with “some spin, a little humor,” like the “Clear Skies Act,” which was passed under the Bush administration and took down several environmental regulations. Among the fake Stewart suggestions he threw out there? The “Make It Rain Act” and the “Remember Me? I F*cking Killed Bin Laden Employment Act Of 2011.”

Among the highlights of the speech for Stewart was also the “awesome cutaways to uncomfortable Republicans” watching, noting that the various members of Congress formed a “veritable spectrum of poorly concealed discomfort.” He looked at Rep. Eric Cantor and Sens. Rand Paul and John McCain, the latter’s expression which he described as being akin to one watching a play in which “he was shocked at the amount of full-frontal male nudity.”

Stewart then offered President Obama an idea to stimulate the economy on top of his new bill: if it takes campaign season to make President Obama passionate and engaged again, perhaps it would be expedient to make campaign season never end! Stewart offered several ways in which this would, somehow, create jobs– besides being a general nightmare scenario for the media.