Jon Stewart Destroys The Right On Gun Control: We Can’t Do Anything Because You Fear ‘Imaginary Hitler’
video

Jon Stewart Destroys The Right On Gun Control: We Can’t Do Anything Because You Fear ‘Imaginary Hitler’

Stewart Rips The Right On Guns: We Can't Do Anything Because You Fear 'Imaginary Hitler' 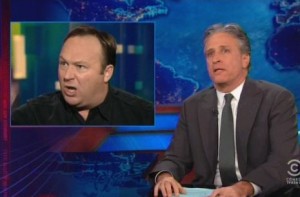 Tonight Jon Stewart took on the topic of the right’s response to gun control in the wake of the Sandy Hook Elementary School shooting in Newtown, Connecticut. “Finally, everybody is ready to talk about gun violence,” he said. “Nothing is off the table, no bad idea, it’s a safe space. Let’s start the discussion on gun control.”

But wait, let’s not. Stewart played a clip of NRA Vice President Wayne LaPierre blaming gun violence on the media and video games. “Sorry, I just assumed that beginning a conversation about gun control meant starting with guns but you want to talk about the non-gun cause of… gun violence,” Stewart quipped.

Violence in our media may be an issue, Stewart admitted, but it’s not just Hollywood, we have to look at other media influences as well. And…cue clip reel from Fox News with hosts discussing everything from “terror cells” in our neighborhoods to “the new Black Panther Party” to the “Sharia Mosques.”

The time to talk about guns, Stewart says, is now. Throughout the rest of the segment, he continued to rip, well, basically everyone on the right about the inability to get any meaningful gun legislation passed.

He finally addressed the Piers Morgan interview last night as well as several other instances of gun advocates fearing a repeat of Hitler’s reign or Mao’s or Stalin’s.

“Now I get it, now I see what’s happening,” he said. “Their paranoid fear of a possible dystopic future prevents us from addressing our actual dystopic present.” We can’t do anything, he added, because the right is too worried about the rise of “imaginary Hitler.”

Watch the video below in two parts, via Comedy Central: