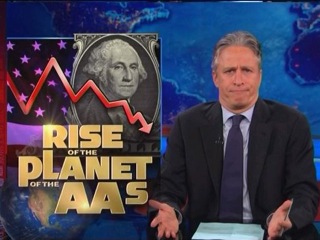 The news of the United States Treasury being downgraded to AA+ rating by Standard & Poor’s seems to have hit Jon Stewart as hard as the rest of us, from the fact that the S&P had given some of the worst mortgage securities great ratings to the market’s decision to sell stocks and collectively invest in “freshly downgraded treasuries.” Expressing what most Americans were likely thinking watching the news all day, Stewart at some point simply threw his hands in the air and asked of the country, “are you f*cking serious?”

Stewart began his segment lightheartedly, mocking S&P’s “stupid” name (“who’s going to listen to a corporation whose name means ‘average & below average’?”) but it took little time for outrage to boil up, beginning with the list of countries who now have better ratings than America. “We’re below the Isle of Man?!” he exclaimed. “There’s no industry there!… I can’t wait to see what these morons said in their analysis,” he quipped. He couldn’t help seeing their point after a quick tour of Sunday talk shows of politicos talking over each other, and Speaker of the House John Boehner claiming he’s very happy with the debt deal that S&P cited as a primary reason for their downgrade. “You are the world’s most misguided tangerine,” Stewart lamented.

But what really got Stewart going was what the stock market did with the new information that America’s treasuries were now less reliable: put all of their money into “the safest place they can find– freshly downgraded treasuries.” He expressed his anger with an analogy: “you broke our f*cking house down and then have the balls to go ‘Hey, your basement still standing. You mind if I, you know, put my money there for a little bit?'”

Mostly missing from his wrap-up of the terrible day? President Obama, who has been doing his part to cope, but seems not to have played enough of a role in the stock market madness to merit a mention.