Jon Stewart Explains Ultrasound Law To GOP: ‘A TSA Pat-Down In Your Vagina’ 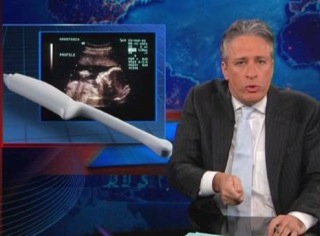 Jon Stewart had a few bones to pick with social conservatives today, and though he began attacking Chris Christie for vetoing the same-sex marriage bill, trying to explain to him that his take wasn’t much different from banning, say, fat people from getting married, but then moved on to the mandatory transvaginal ultrasounds proposed for women who want abortions in Virginia. His best guess at a comparison? Like something out of A Clockwork Orange.

After a slap in the wrist to Gov. Christie for the gay marriage issue, Stewart began a second installment of “The Punanny State,” his series on the intrusive abortion law proposed in Virginia. He joked that “Transvaginal Ultrasound” sounded like a nifty fusion jazz band before describing the actual procedure. For that sort of intrusive medical act, however, he was honest to the audience: “I don’t really have a joke here, I just thought I’d tell you.” The good news? You don’t have to watch the video of the inside of your uterus on the screen! “Virginia could have made you watch the image, like in the dystopian classic Clockwork Orange.”

Stewart then tried to find some equivalent on the right of an intrusion into one’s body where the government should not be allowed, and found Virginia Gov. Bob McDonnell vocally opposing TSA pat-downs. “This is like a TSA pat-down inside their vagina,” Stewart explained, outraged that to the state, “it’s not rape, it’s a regional quirk.”

“Whatever happened to Republicans being the party of small government?” Stewart asked, concluding with Reagan’s famous joke that the scariest words in the English language were “I’m from the government, and I’m here to help.”