Jon Stewart Exposes How GOP Candidates ‘Communicate’ To Their Base-istan 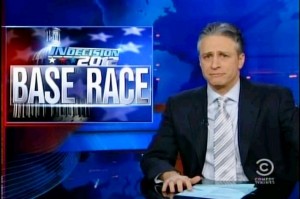 On tonight’s episode of The Daily Show, host Jon Stewart decided to take an in-depth look at the way Republicans vying for the chance to become the 2012 Presidential candidate address their base – or, put a little more colorfully, the fine citizens of Base-istan.

Stewart named Michele Bahmann the front-runner for her ability to appeal to her base while circumventing the “lamestream media.” Case in point? Her Tea Party address this past January, which “bypassed not only the lamestream media, but the cameraman.” Cue slide whistle! Then there was her live townhall, via Facebook, from a mall in Des Moines. Bachmann, rather curiously, took questions whilst standing in what was quite possibly the loudest area of the entire shopping complex, within earshot of an (Indoor? Awesome!) waterfall.

Then there’s businessman Herman Cain, who attempted to win the hearts and minds of would-be voters by vowing not to hire Muslims to his staff. Newt Gingrich echos Cain’s unwavering patriotism by expressing his fear that, if something isn’t done to “win the struggle over the nature of America,” his grandchildren will grow up to live in a “secular atheist country, potentially one dominated by radical Islamists.” We’ll wait while you all let that one sink in. And, then of course, there’s the fact that Gingrich loves this country so much that he would… cheat on his wife with another woman. Which happens, of course. I can’t count the times I’ve sent sexts to men other than my boyfriend simply because I was overcome by the Christmas spirit.

Rick Santorum, meanwhile, has said he believes Social Security is in trouble because would-be workers who would be supporting today’s retirees were aborted before having the chance to stare at puppy calendars in their cubicles. Stewart pointed out that, perhaps, Social Security would have been in less trouble had more baby boomers been aborted. It’s all quite like an Escher painting, almost.

Mississippi’s Haley Barbour has boasted about his anti-abortion initiatives, which have been instrumental in helping his state become the “safest place for an unborn child,” who will then, according to recent statistics, go on to die as a young child. Which is mildly awkward, to say the least.

Take a look at the clips, via Comedy Central: