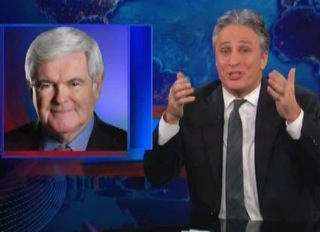 Jon Stewart came back from his weekend to find a pretty dramatic shift in the dynamics of the Republican primary. When he had left, Mitt Romney was a “juggernaut,” impossible to stop (see several movie posters Stewart apparently made to celebrate this fact). But now he’s back, and it’s all Newt Gingrich, all the time. And all because of a debate moment that makes Stewart completely flip out.

Stewart began his report highlighting the major leap in support over the past week for Gingrich. “Gingrich smoked Romney by 12 points. That’s like winning by four overtime field goals!” (This was Stewart having an outburst about the Giants winning last night). How did he turn it around? Well, Stewart launched into a convoluted explanation of the women in Gingrich’s life– the first and second wives, the first and second lovers, the third wife who may be the First Lady?– that went nowhere. Instead, he went to “the moment where values’ voters supposed disgust… is knocked out.” And he played this clip.

“As close to despicable as it can get?!” he shouted, after a lot of angry stuttering at the camera over Gingrich daring to challenge John King for bringing up his insanely complex marriage life in from of a family values crowd. “I think you have a pretty good imagination for despicability!” He then played King’s response– something about it not being his fault, etc.– and only pursued his anger further, and the fact that Gingrich could get away with his immoralities during the “Clinton penis scavenger hunt” and “King shanked [the question].”

Then there was the whole Freddie Mac deal, as if Stewart’s blood pressure wasn’t high enough. Gingrich claimed he had a “small business” of some sort (“your small business involves selling access to Washington!”) and was an “outsider” (“You’re such an insider… that when Washington gets its prostate checked, it tickles you!”). He wondered if the rise of Gingrich made Republicans happy, only to have a ready-made montage (how do they do that?) of Republicans bickering over the top two candidates.

Stewart had a solution: “I think I can settle this intra-party squabble: you’re all right. They’re all terrible.”