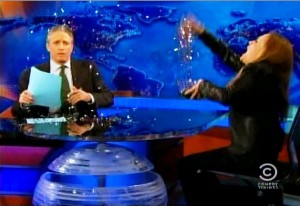 When a ten-minute roast by Jon Stewart is actually one of the more favorable critiques of your campaign, maybe it’s time to retweak the campaign strategy.”Lego figure” Newt Gingrich was dealt a kind hand from the Daily Show host tonight as Stewart noted the 180º turn commentators took after Gingrich “appealed to the moderate wing of the Republican Party,” gave him a tongue-lashing for backing down, and proceeded to be covered in glittery confetti.

In what feels like ages ago, Stewart noted that the Republican Party was lavishing praise on the former Speaker for being an “ideas man,” “one of the smartest people alive,” and, in former New York mayor Rudy Giuliani‘s words, having “two ideas a minute” (which was apparently meant to be a compliment). Then he decided to appeal to moderates, Stewart noted– “a wing [of the GOP] that has been closed for renovation since Nelson Rockefeller died”– and it all went downhill from there. Stewart didn’t let Gingrich go easily, making the obvious joke about Gingrich’s comment that any advertisement that directly quotes him “is a falsehood,” and bringing on correspondent Samantha Bee for more analysis. “Republicans are outraged at him, Democrats are sprinkling him with glitter,” Stewart noted, what should he do? Bee argued that, just as Democrats do when they are in political trouble, Gingrich needed to “distance himself from the left,” which, unlike with Democrats, doesn’t exactly put him closer to the center. She didn’t quite win this argument, however, so instead made it rain confetti-glitter all over the Daily Show host in protest.