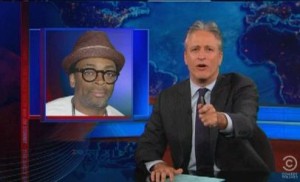 As you may know, Spike Lee recently re-tweeted an address that he thought belonged to George Zimmerman — the one involved in the Trayon Martin shooting. Turns out, the address belonged to an older couple, the McClains, and they’ve since fled their home fearing their lives. On this show Thursday night, Jon Stewart went after Lee, sympathizing with the “adorable” couple. Give them a call, he told Lee. That’s what any retiree in Florida really wants.

In his “Gaffe Watch” segment, Stewart first went after Mitt Romney’s gaffe-y response (Russia is our number one geopolitical foe) to President Obama’s hot mic gaffe from earlier this week. America doesn’t play “hate favorites,” he concluded. He then moved on to Lee and the unfortunate tweet.

“Who would do something that asinine?” Stewart asked, saying he’d hoped it was a “fringe” Twitter user with 12 followers. Oh, but it’s Lee. Who has around 250,000 followers. He then played a clip that described the incident as a “bad mistake.”

He then told 55-year-old Lee to “leave the cyber-bullying to teenagers.” How could this get any worse, Stewart asked, before noting the couple affected by the tweet “are the most adorable people ever.”

They moved to Florida to enjoy these years, and suddenly they find themselves on the corner of “Bullseye St. and Angry Mob Ave.,” he said. Addressing the tweet removal, he quipped, “Oh, good, we all know when something’s removed from Twitter, it’s gone forever. Like it never happened. Damage fixed. Come on, Spike!”

Then he said Lee’s Twitter apology might have been through the wrong medium. “Tape a note to their grandkids,” he said. “Or call them. That’s what they really want. That’s all any Florida retiree really wants.”