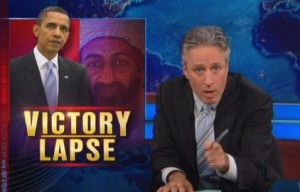 To no one’s surprise, on Tuesday night Jon Stewart took on the chatter surrounding the anniversary of Osama bin Laden‘s death. He shot down the outrage over President Obama‘s Osama bin Laden ad, saying Republicans would have done the same thing — and they’re just mad because they didn’t get the chance.

Playing some Republicans’ reactions to Obama’s bin Laden ad, Stewart commented, simply and emphatically, “Wah.” He then articulated his argument with a bit more detail:

So let me get this straight. Republicans, you are annoyed by the arrogance and braggadocio of a wartime president’s political ad? You think he is divisively and unfairly belittling his opponents. I see. Have a question. Are you on crack? Were you alive lo these past ten years? It seems unseemly for the president to spike the football. Bush landed on a fucking aircraft carrier […], he spiked the football before the game had even started!

He asked, “You are aware that the frontal lobe of the cerebral cortex gives us the ability to store and recall past events as they occurred, right?”

Addressing critics who said the president should be credited all those who made the raid possible, Stewart quipped, “I think he thanked everybody but Harvey Weinstein.”

Stewart concluded, “Look, Republicans, yeah, the Obama ad, kinda shitty, a little of a cheap shot, but the only reason you are pissed is that you didn’t get to run it.” He then played the ad he said Republicans would have run, had a Republican ordered the raid: an obnoxiously patriotic ad featuring President George W. Bush claiming victory, patting himself on the back, with lines like “death is a dish best served barbecued.”