Jon Stewart Goes To Bat For Rep. Anthony Weiner: ‘His D*ck Is Just Not That Big’ 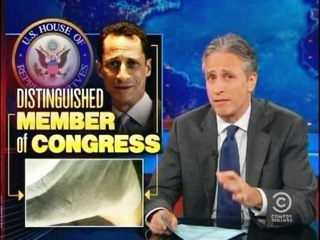 Jon Stewart hosts a comedy show about embarrassing or otherwise comical things that happen in politics. As far as political sex scandals go, a politician whose name can mean “penis” getting in trouble over a picture of precisely that is a goldmine of jokes. The problem? The politician in question is Rep. Anthony Weiner, with whom Stewart has been friends for years. The two are so close, in fact, that Stewart is certain that picture isn’t of him, because, he recalls, “this cat had a lot more Anthony and a lot less Weiner.”

Speculation as to whether Stewart would cover the story at all abounded, and Stewart addressed the joy such a story would typically bring to his office by noting that “if we were to have a wheelhouse,” a story about penises about a man named Weiner would be just about it. “But this is my friend Anthony!” Stewart noted, clarifying that, contrary to previous reports, he and Weiner had only rented a summer house together in Delaware (“think Jersey Shore meets Yentl). He then noted that, in his time around Weiner, he had evidence that the photo could not possibly be him, if only based on size. In fact, the only thing the two had in common, he joked, was that they “both lean hard to the left.”

Stewart then took on CNN’s coverage of the scandal, noting that they asked many questions without answering, only to later report that information from blogging sources were not entirely concrete. Compiling much of the information from blogs that CNN seemed not to have, he then reminded CNN that they got it through “journalism,” a thing they seemed, he concluded, not to do.

But Stewart didn’t spend too long ragging on CNN, as he had a more important point to make: “[Weiner]’s d*ck isn’t that big. It can’t be.”