Jon Stewart: GOP Is Trying ‘Every Chocolate In The Box’ Before Settling On Mitt Romney
video

Jon Stewart: GOP Is Trying ‘Every Chocolate In The Box’ Before Settling On Mitt Romney 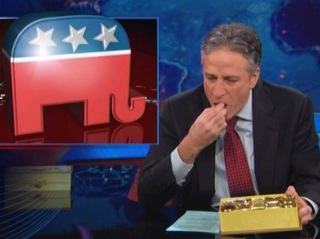 While the Iowa caucus results are not entirely out– with merely hundreds of votes between frontrunners Mitt Romney and Rick Santorum, a previously-vacationing Jon Stewart came back to a completely different landscape than the Newt Gingrich-dominated race he left in December. And he had an analogy to compare what Republicans were doing with these candidates the whole time.

“When our show left in December, Newt Gingrich was the frontrunner,” Stewart noted– a frontrunner he was adamantly against. Over the break, Stewart realized that the Republican primary felt a bit like the Amish tradition of rumspringa, in which the Amish go out into the real world before returning to the monotony of Amish life. This, Stewart joked, was a “rom”springa of sorts, in which the Republicans had run with many candidates before inevitably getting married to the idea of Romney as nominee. This idea seems to have brought them to Ron Paul for a bit before the racist newsletter scandal, and after that “you have to go back to Romney, there’s nobody else. Unless… please no,” Stewart told Republicans, but it was too late– Rick Santorum was in the lead now.

“Santorum, really? Republicans, you’re going to try every chocolate in the box?” Stewart asked, bringing out a box of chocolates. He picked up the chocolate-covered cherry, started at it with disgust, and said, “this one that you don’t try because you know it sucks, this one is Santorum.” But he bit into it anyway. Essentially, he called Rick Santorum a chocolate-covered piece of fruit. Which sounds incredibly familiar, for some reason. But Romney was the plain, boring chocolate bar in the middle of the box– the last piece you try and the one you claim you wanted the whole time despite ignoring until the last minute.