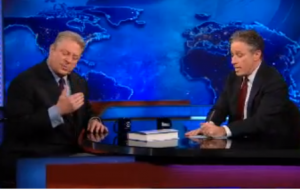 On Wednesday night, Al Gore faced further questioning about his decision to sell Current TV to Al Jazeera. This time, from Jon Stewart — who deemed it an “odd move” to sell to a network “backed by fossil fuel money.”

“I’m proud of the transaction,” Gore told Stewart, reiterating the message he’s given everyone: that Al Jazeera is a well-respected organization with high-quality coverage of climate change issues. (Critics of Gore’s sale to Current TV have pointed to, among other things, Gore’s reputation as a environmental activist focused on climate change.)

“Can mogul Al Gore — who has Current TV and sells it to Qatar, which is an oil-based economy — can mogul Al Gore coexist with activist Al Gore?” Stewart asked. “If you couldn’t find for your business a more sustainable choice to sell to—“

“I think it is sustainable,” Gore interjected. “What is not sustainable about it?”

“I mean, a non-fossil fuel based buyer,” Stewart replied.

“So here you have an award-winning network that has established its reputation for excellence that does terrific climate coverage,” Gore responded. “They want to come in here and give 24/7 commercial free outstanding news reporting and give thorough coverage to the climate issue, why not?”

Stewart argued that Current TV could have accomplished that goal, but Gore disagreed, saying they lacked “deep pockets.” Asking about the “cost-benefit analysis” behind the decision, Stewart wondered about sustainability.

“You had an opportunity to make a statement, probably, about your principles,” Stewart said, “and some people would feel, and for me as well, I thought it was an odd move. Not because of some of the other things, but because it is backed by fossil fuel money.”

“Can you see how people at home might think — but he’s asking me in my life to make choices about light bulbs and a cost-benefit analysis for the purpose of sustainability when I just want to see my book. That’s the issue,” Stewart continued.

“I’m very, very comfortable with it,” Gore said. “I completely get the criticism, but this was a good choice and the net benefit for the U.S. is going to be very positive.”