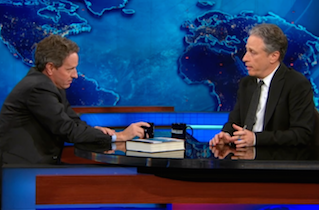 Former Treasury Secretary Timothy Geithner, who has been making the rounds to promote his new book, Stress Test: Reflections on Financial Crises

, joined Jon Stewart on The Daily Show last night for an even-more-extended-than-usual interview. Right from the start, Stewart went at Geithner hard to explain the “perception difference” on the bailouts.

“There’s only one reality,” Geithner insisted, pointing to the “terrible financial panic” that followed the collapse of Lehman Brothers. “The only option — the only moral, responsible, just thing to do in that context is to protect people from the risk of mass unemployment, which is what happens in financial panics unless governments step in and make sure they keep the lights on.”

When Stewart began describing the situation as a plane full of arsonists on fire and going down, Geithner stopped him. “Well, it wasn’t just the arsonists,” he said. “If it was just the arsonists, you could have let the plane crash, that didn’t matter. The problem is there was a bunch of innocent victims who were on the plane with them.” Namely, the American people.

In that context, Geithner said he was forced to “do the opposite of what seem intuitive and fair” by bailing out the large financial institutions. “You don’t do it for the banks and the bankers,” he said. “You do it to protect them from their mistakes.”

Stewart admitted that Geithner had a “compelling case,” but said the federal government may have gone too far “when you took the arsonists off the plane and got them a massage and steak dinner.”

And there’s a whole lot more where that came from. You can watch all five parts of Stewart’s extended interview with Geithner at thedailyshow.cc.com.