Jon Stewart: How Are The Occupy Wall Street Protesters Not Like The Tea Party? 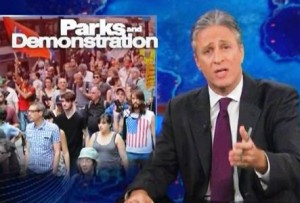 On Wednesday night’s The Daily Show, host Jon Stewart turned to the Occupy Wall Street protests, explaining that the media’s coverage as gone from “blackout” to its only other setting, “circus,” as reporters from “from all the major networks… and CNN” have made their way down to the live-in demonstration.

He looked at some of the media’s coverage of the protests, most notably Ann Coulter‘s assessment that with “slight modification,” the protesters’ message could have very well come from German Nazis. How, he asked, could they be both a disorganized band of hippies, as much of the media would have as believe, and like a highly-organized, well-trained representation of totalitarian ideology?

Later, Stewart played a clip of Fox News personality Sean Hannity discussing a group that is expressing its frustration over being on the hook for “the trillions and trillions of dollars” being used to bailout major corporations…

…And that group was the Tea Party, back in 2009. And his thoughts on the protesters today? According a clip from October 3rd, they “hate corporations, they hate capitalism, and in the end, ultimately, they want statism over free markets. So they really don’t like freedom.” Stewart doesn’t quite understand the difference:

I don’t get it! Here’s a group of Americans, disenchanted, railing against big government bailouts, angry because they played by the rules, worked hard, now they’re in debt from student loans and they’re unemployed… I mean, look, if this thing turns into throwing trash cans into Starbucks windows, nobody’s going to be down with that. We all love Starbucks.

But these protesters, how are they not like the Tea Party? Alright, some of them, you know, smoke and have pants made out of pot. So call them the THC Party. Aren’t these folks real citizens with real problems? Aren’t they also speaking for America?

According to the media? “NOPE!” One reason? They’ve broken laws. But Stewart was quick to point out that the Tea Party movement’s namesake happens to be “the most celebrated act of theft and vandalism of private property in our nation’s history.”

Watch the segment, via Comedy Central: