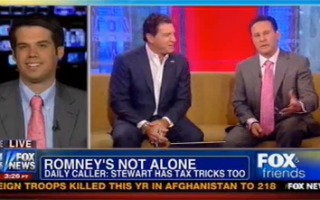 “I watch him every night and think he’s very funny,” said Weinstein, adding however that “just because you’re a comedian but you have a political show doesn’t mean you can avoid scrutiny like everybody else. So we looked into his record and while he, as you just showed, he decried Mitt Romney for making $57,000 a day, he himself, according to estimates, makes $41,000 a day. So not too much of a difference between him and Mitt Romney on that level. But in fairness, of course, he was talking that Mitt Romney makes this amount but supports — doesn’t support the Buffet Rule. But I think the real interesting question is how Jon Stewart feels on income inequality and how he actually treats the staff.”

RELATED: Is It Time For Jon Stewart To Hang Up The Daily Show Gloves?

The show then played a clip from a 2000 episode of Larry King‘s program, showing Stewart agreeing that “most people” would see him as a Democrat, but that, really, he’s more of a “socialist.”

Stewart is actually en route, Weinstein explained, to “making more than Mitt Romney by the time he’s 65,” being worth over $300 million to Romney’s $250 million. But the most interesting point in all this, Weinstein added, is that “Stewart rails against income inequality and how CEOs on Wall Street make 300 times the average worker. Well, the same thing with Stewart. Stewart makes 300 times the median household American income. If he was really, really concerned about this problem, he could take his estimated $15 million in salary and say look, ‘you know, I don’t want this $15 million. I don’t want to contribute to income inequality. Let me distribute it, share the wealth around my staff to reduce that income inequality.’ But as far as I know, he doesn’t do that.”

“Isn’t that what a good self-admitted socialist should do, take some of the salary and distribute it around his staff?” asked fill-in host Eric Bolling. Brian Kilmeade joked that Stewart could lend some of that wealth to poor, struggling Steve Carell or Stephen Colbert.

“I think this is the greatest hypocrisy if there’s anything in this story,” Weinstein concluded. “Both with Stewart and Hollywood liberals generally. They often decry the great disparity in income between the average worker and CEOs, but they themselves make 300 times the average American worker and I don’t see them trying to share the wealth with those who help in their movies or help on their staffs to reduce income inequality on the local level where they can help.”