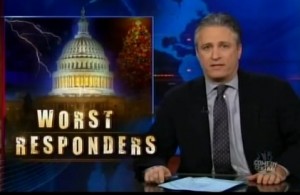 On The Daily Show‘s last taping of the year before the holiday break, host Jon Stewart removed absolutely any doubt about which issue is his nearest and dearest by dedicating his entire show to the issue of funding of incremental health care for 9/11 First Responders. Stewart broke from his typical show’s outline, opening with an angry recap of the Senate GOP’s apparent refusal to support the aid bill, then targeting the American media outlets that oddly avoided coverage. The second segment featured a serious and moving round-table with affected responders. Updated.

Anyone that lived in New York in 2001 would reasonably share Mr. Stewart’s anger over this issue – and given that The Daily Show lives in the Tribeca neighborhood of Manhattan, just a few short blocks from Ground Zero, and was likely personally witness the heroic actions of the first responders, one can certainly understand his heightened emotion.

Stewart spared no target in his ridicule, though the segment below is distinct from the usual Daily Show fare in that it’s clear that it was created more to inspire, motivate and in some sense vent his frustrations instead of ridicule for comedic effect. The panel discussions with effected first responders was as moving a discussion as one has seen about 9/11, though without the effort to score cheap political points as was so often the case in the Ground Zero Mosque outraged that was primarily ginned up by Fox News (who has been relatively quiet on this issue like their cable news peers.)

Update – Johnny Dollar points out that earlier this week Fox News legal analyst Peter Johnson, Jr. eloquently responded to the failed vote on Fox & Friends, (though notably absent is any mention of the GOP) which can be viewed here.

Watch the two segments from Comedy Central below: