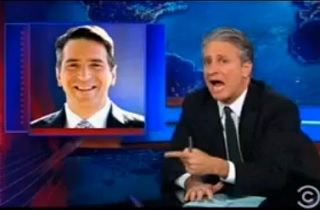 The mainstream press has been engaging in a decidedly one-sided telling of the Justice Department’s investigation into Fox Hard News Reporter James Rosen‘s contact with a State Department source who allegedly leaked him classified information. On Thursday night’s The Daily Show, one-time Most Trusted Man In America Jon Stewart joined the widespread effort to conceal facts about the Rosen story when he asked what sensitive information the Justice Department was going after Rosen’s source for divulging, and answered in a way that can charitably be described as misleading, or uncharitably described as a lie.

For a few weeks now, Jon Stewart has been basking in his latest opportunity to seem non-partisan by going hilt-deep on the current Scandalabra™ narrative, beginning with his ridiculous assertion that the then-just–unfolding IRS scandal vindicated every vile conservative conspiracy theory in one swell foop. One of the things Stewart’s fans like about him is his normal tendency to puncture air-headed media narratives, not build them, but hey, commentary is fair game. It’s quite another thing, though, to flat-out lie, which should only be done in service of constructing a spectacular comic premise. I’m not sure this qualifies. After conflating Rosen’s case with the AP leak investigation, Stewart says “I’m sorry, national security is important and I’m sure the full court press on this Rosen character, this Rosen ‘reporter,’ was in the service of protecting some pretty pretty sensitive information.”

He then plays a clip of a Fox News reporter saying that “Fox News reporter James Rosen vowed Wednesday night to protect his source for a scoop he got back in 2009, reporting then that North Korea would respond to sanctions with more nuclear tests.”

Check out the clip below, from Comedy Central’s The Daily Show:

“That’s it?” Stewart says. “That’s the leak they needed to quash? North Korea to answer sanctions with more nuclear tests?”

Of course, that’s not it, and a devoted Fox-watcher like Jon Stewart surely knows that. The Justice Department investigation stems from an alleged leak that appeared in this 2009 Fox News article by James Rosen:

In case Stewart couldn’t quite suss out the sensitive detail in that reporting, Rosen himself hangs a lantern on it, as they say in the comedy biz:

In fact, it is the very lack of any real news value in that report which makes Rosen’s decision that much more puzzling. It’s like Rebel Alliance News reporting that “Bothan spies, deep inside the Empire command structure, tell us that Darth Vader’s helmet is black, and also that the snow on Hoth is, and this is a quote, ‘cold.'”

I have a great deal of respect and admiration for current and former Fox News reporters like Ed Henry, Wendell Goler, and Major Garrett (and used to include James Rosen in that category), so I understand Stewart’s impulse to take their side when given the opportunity. This isn’t that opportunity, because if it was, Stewart wouldn’t need to lie in order to do it.

As I’ve noted the past few days, however, Jon Stewart isn’t alone in flacking for James Rosen. The mainstream media has refused to report on key details of the leak investigation (really, any), and has consistently slanted its reporting to make the Justice Department’s actions seem comparable to the abuses suggested by the current Associated Press leak investigation. You can now add well-respected NBC News investigative report Michael Isikoff to the list. Isikoff reported, in an item highlighted on Mediaite, that U.S. Attorney General Eric Holder “signed off on a controversial search warrant,” and indicated several times that Holder had “approved” the warrant, and quoted a source as saying ” “It was approved at the highest levels– and I mean the highest,” including Holder.

Anyone reading Isikoff’s account could be forgiven for gleaning the impression that the search was conducted under Justice Department authority, since Isikoff doesn’t get around to explaining that the actual search warrant was issued by a federal judge until the fourteenth paragraph, and even then only with this highly parenthetical mention:

In new documents disclosed Thursday, the Justice Department sought and obtained approval to keep the search warrant, which was approved by a federal magistrate, under seal.

That’s a key distinction, because the bulk of Isikoff’s reporting suggests that Holder seized Rosen’s email under his own authority, rather than by showing probable cause in a court of law.

Journalists are understandably defensive about their turf, but their reporting on this story doesn’t protect good journalism, it undermines it.