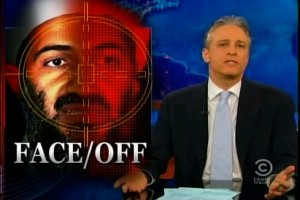 On The Daily Show tonight, host Jon Stewart took a little time to make a case for releasing the photos of Osama bin Laden‘s corpse.

Stewart began his segment by noting that, just as the U.S. can (for the most part) collectively exhale now that President Obama’s long-for birth certificate has been released, another groundswell has risen surrounding the photo evidence of bin Laden’s death.

But, you know what, I’m all for healthy skepticism and even though bin Laden’s widow positively identified the body to Pakistani authorities, why wouldn’t we release the headshot of bin Laden’s head… shot?

Stewart noted that a whole lot of American programming – like the wildly underrated series Bones – prominently and routinely featured close-up shots of gaping head wounds. Sure, there’s a slight difference between watching an actor slathered in makeup and studying an actual person’s bullet-riddled brain matter but, hey. Anything that inspires a David Caruso impression is a-ok by us.

Stewart then grew slightly more serious when discussing “the Muslim world’s” already prevalent animosity towards the U.S. – something he thinks releasing the photos won’t change – and pointing out that networks in that area of the world, such as AlJazeera, routinely show graphic images of those who have died because of our military efforts, whether by accident or on purpose.

He offered an alternative way the White House could “prove” bin Laden’s death without actually releasing the photos to the public: Have journalists view them, then report on them.

War is grisly, Stewart added. It’s not a video game. And, just maybe, it would be beneficial to have people fully realize just how harrowing war can be. Showing photos of bin Laden’s corpse – or of other, actually innocent casualties of war – can help bring the public to that realization.

Take a look at the segment, via Comedy Central: