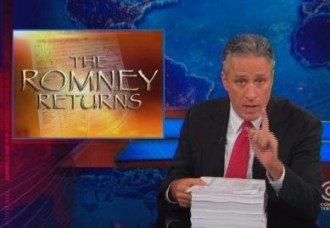 During Thursday evening’s edition of The Daily Show, host Jon Stewart went after presumptive Republican presidential nominee Mitt Romney for his reluctance to release tax returns beyond what is legally required of him.

“Presidential candidate Mitt Romney continues to refuse to release his tax returns from any year prior to the years he was running for, I don’t know, the presidency,” Stewart began. “Because, as his wife Ann Romney explained today, why don’t you all shut up?”

Romney’s wife had told Good Morning America Thursday morning that “we’ve given all you people need to know and understand about our financial situation and about how we live our life.”

“You know enough!” Stewart mocked the Romney’s view of those who ask for more tax returns.. “You have learned that we, the Romneys, live in the grey netherworld twixt what is legal and what is moral; where desire meets power and one night get drunk, sleeps and has a baby named ‘Privilege T. Moneybucks.'”

Stewart then launched into a “The Romney Returns” branded segment, based on made-up “secret” tax returns obtained by The Daily Show. “How did we do it? How did we get access to all of his tax returns? We made it up,” Stewart conceded, highlighting the idea that without Romney’s tax returns released, his detractors can only imagine what could make up the returns.

“Nobody cares that he’s rich,” Stewart said. “They care about the institutional advantage that he has gotten through tax code largesse. See, he’s been dogged by allegation that he hides his money in tax-free offshore accounts in places like the Caymans, Switzerland and that island from Lost…. Of course, Mitt Romney could only keep so much money offshore, which is why we found in these forms Romney has been a pioneer in a new system of tax avoidance. In 2006 he put $12 million into ‘Hover money’ — it’s one of those game show style cash blowing machines insuring that his money never touches American soil long enough to be taxable.”

He continued on with other fake things found in Romney’s tax returns: “A vast improvement over the first idea reflected in his 2005 returns, hiring millions of money jugglers. This is all in addition to Romney’s ‘on-shore off-shore’ accounts. According to his 2002 returns he didn’t just send money to Switzerland, he purchased a town in America for an internal bank, he populated it with Swiss people and stuffed money up their asses, because the insides of Swiss people are also technically Swiss soil and immune to American tax law.”

Stewart went even further with the fake information about Romney’s Swiss people/bank accounts: “You are probably asking: What happens if he needs his money right away? It’s in Swiss people’s colons and they are notoriously constipated people…. Mitt Romney plays a game he calls ‘Swiss Piñata’ and he doesn’t even wear a blindfold…. I’m saying when Mitt Romney needs money quickly, he beats a Swiss person until they break open.”

“At least according to the tax papers we have,” he concluded. “I’m sure if there is anything else we need understand about the financial situation, they’ll let us know.”