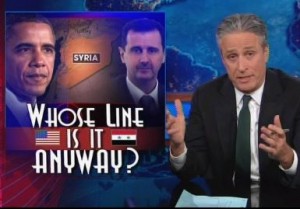 Jon Stewart took on the issue of Syria crossing the “red line” in its potential usage of chemical weapons against its own people. Stewart focused mostly on the Republican response to this unacceptable red line crossing, calling out their militaristic attitude for not having learned anything from Iraq. Stewart highlighted a few similarities between the current situation with Syria and the one almost ten years ago from Iraq, and found it odd that Republicans haven’t realized they might want to exercise more caution this time around.

Stewart mocked the U.S.-imposed red line, saying “You can come up to the line… [but] you cross that line, mister, you are grounded!” But now that the line has been crossed, what’s the next step? Stewart noticed a lack of clarity from the White House on exactly what happened, using a Dr. Seuss poem to put things into perspective.

However, what Stewart found more interesting was how the GOP has been criticizing Obama for not getting more involved in Syria, and tore into Lindsey Graham for suggesting giving the right weapons to the right people, by pointing out that could be solved with background checks. But Republicans like Graham and John McCain don’t want boots on the ground, and Stewart couldn’t help but wonder how the hell that’s supposed to happen if the U.S. is going to arm the rebels and then consequently asking for those arms back. When Graham suggested international involvement, Stewart quipped that we may as well just send in Latvian troops.

But any action is going to run into roadblocks at the U.N., and Stewart found it awkward that any potential intervention in Syria relies on “convincing Vladimir Putin that it’s bad to poison people.” Stewart called out GOP senators and George W. Bush for not learning any lessons from Iraq, suggesting “that little misadventure made us a little more cautious” about how we handle red lines.