Jon Stewart: Mitt Romney Wins NH! ‘While Still Having No One Like Him’ 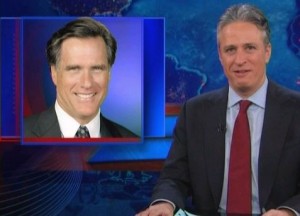 In the aftermath of Republican hopeful Mitt Romney‘s victory in New Hampshire, The Daily Show‘s Jon Stewart was in awe of the former Massachusetts Governor’s success despite having no real enthusiastic fans. “He became the first Republican non-incumbent to win Iowa and New Hampshire while still having no one like him!” Stewart jabbed.

RELATED: Jon Stewart: GOP Is Trying ‘Every Chocolate In The Box’ Before Settling On Mitt Romney

Stewart noted that Romney slammed President Obama by saying all of his campaign pledges were “lofty promises made by a hopeful candidate.”

“Yeah, what a jerk that Obama was!” Stewart snarked. “Oh, I’m going to do this and I’m going to do that. A**hole! Empty suit standing on a platform in New Hampshire making lofty promises he knew he couldn’t possibly fulfill — I’m sorry, Mitt. I interrupted you. Continue!”

Stewart played various clips of Romney promising the world, with “capping and balancing the federal budget,” “making the federal government simpler, smaller and smarter” and “insisting on a military so powerful no one would ever think of challenging it.”

“See, people, my promises are realistic! A tiny government, a balanced budget and a giant invincible army! Ladies and gentlemen, I give you new Sparta!”

Later in the segment, Stewart criticized Lawrence O’Donnell for saying Ron Paul didn’t matter and Huntsman was “the real 2nd.” “No! You can’t!” Stewart boomed. “You’re not allowed to take Ron Paul out of this! That’s just physics! And you know, if you add two zeros to the end of Huntsman’s totals, he would have been in first by hundreds of thousands of votes, an unprecedented victory! Why is no one talking about this? Because it didn’t happen!”

Stewart moved on to talking about Huntsman which he surmised he had to since it was a limited time offer to do so, and ribbed the former Utah Governor for saying 3rd place was a ticket to ride. “A ticket to ride– home, in coach!”

He then played footage of confetti raining down on Huntsman, which Stewart reacted to in A League Of Their Own-style shock. “There’s no confetti for third place!”

The Daily Show host then told Huntsman to meet him at Camera “You Came In Third”. “I know it’s hard for you, but it’s over.” Later putting it to him in a language he would understand — Mandarin.

Watch Stewart’s analysis of the New Hampshire primary below via Comedy Central: