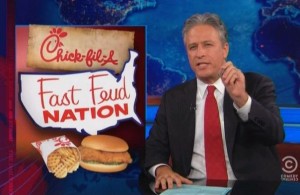 Jon Stewart looked back at yesterday’s national Chick-fil-A Appreciation Day, wondering what could have inspired such massive cravings for a chicken sandwich. Well, the massive protest started by Mike Huckabee to support the right of the fast food franchise’s owner to state his views on gay marriage, which Stewart dubbed the “million mouth march,” resulted in the chain making record profits. Stewart agreed with the First Amendment argument, and even ripped into the mayors trying to ban the chain from their cities.

After going through a whole list of sexual innuendos connected to eating chicken sandwiches to convey the delicious irony of participating anti-gay individuals, Stewart reminded viewers of the comments of Chick-fil-A CEO Dan Cathy. But while Cathy finds his justification for opposing gay marriage in the Bible, Stewart couldn’t help but note that Chick-fil-A’s food products, some made with cheese and bacon, may not exactly measure up to Biblical standards.

Stewart then turned to the mayors all across the country pledging to keep Chick-fil-A out of their cities, mocking them for pushing the kind of overreaching censorship conservatives always criticize them for.

“Pretty sure you can’t outlaw a company with perfectly legal business practices because you find their CEO’s views repellant. Not sure which amendment covers that, but it’s probably in the top 1.”

Stewart made the point that if Chick-fil-A really is opposed to the values of these cities, the mayors might as well expel every anti-gay church in their cities as well.

Stewart ended by making the point that the whole thing is a win-win for both sides. For conservatives, it’s a way to support traditional marriage and, more subtly, a rejection of Michelle Obama‘s healthy eating initiative. And as for liberals and gay marriage activists, Stewart reassured them by saying, “you get gay marriage, and and all your political opponents are going to get is type 2 diabetes.”